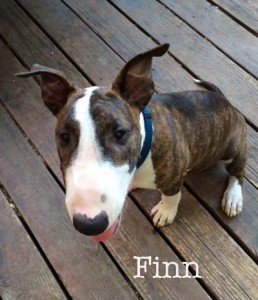 7mo Finn was adopted from a local shelter about two months ago. He is not good with the cats in the home; and he is getting into fights with the resident 4yo male Pug. It could be a territorial thing as he gets along and loves playing with other dogs outside of the house (he plays with, and nicely takes to corrections issued by the neighbor’s two older male dogs). The icing on the cake was when a friend stuck her leg between the Pug and Finn to avert a fight and Finn accidentally bit her instead (he instantly let go when he realized that he bit her and not the Pug). His owner has done a lot with sweet Finn in the two months that he’s been with her. He is now obedience, crate, house and leash trained. Any one interested in fostering/fostering-to-adopt this little guy? He’ll need a owner who won’t be afraid to stay on top of him since he’ll be approaching his teen angst period. Finn is about 40-45lbs.